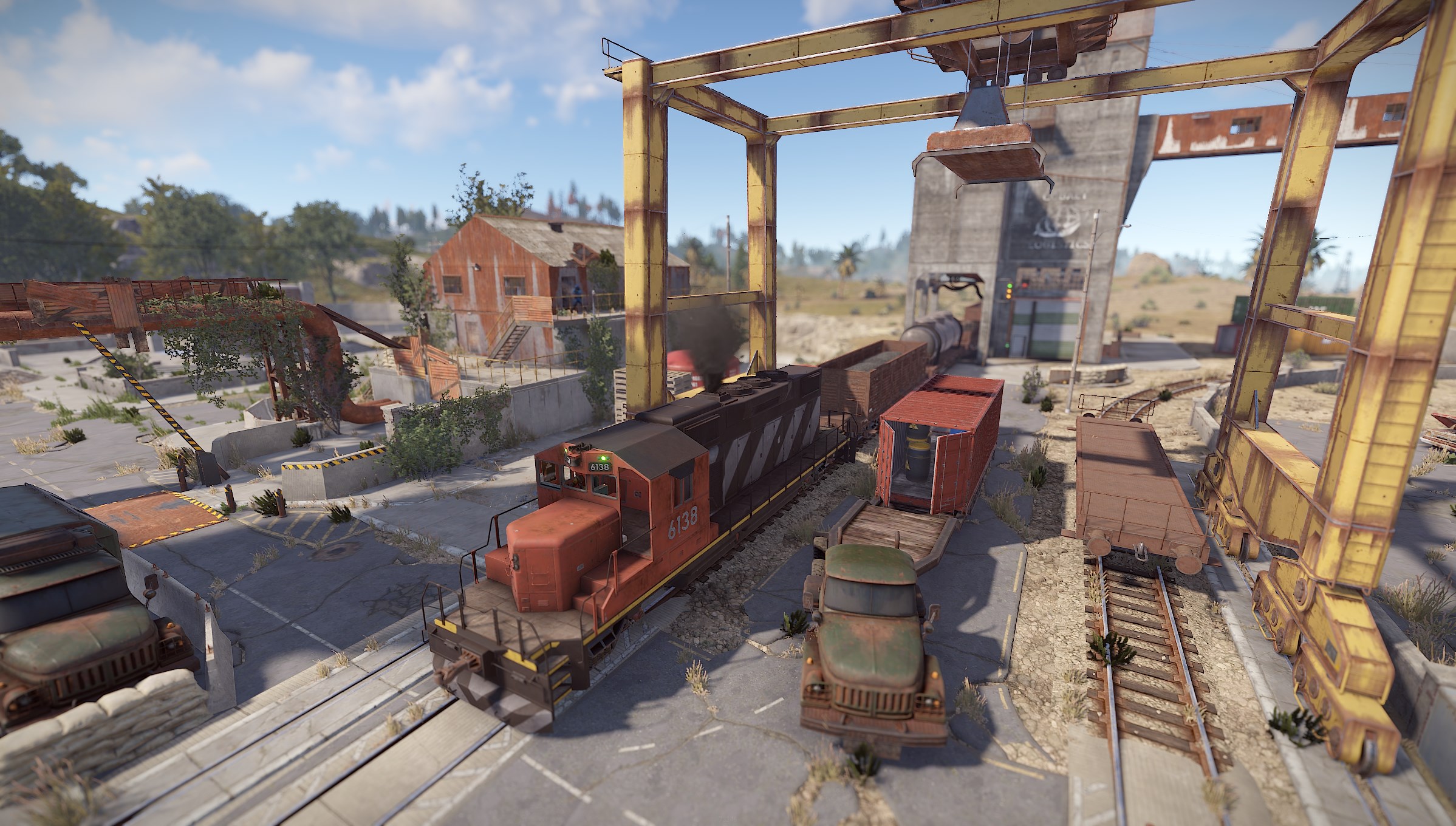 The above-ground rail network is now connected up to the Trainyard area, and the Trainyard has a new tower that can unload certain types of train wagons.

All of these can be hooked up to a train and taken to the unloading tower at Trainyard for unloading. You'll need a green keycard and a fuse to get full access, after which you can unload as many wagons as you like. Ore and fuel go into an output hopper and fuel tank respectively inside the tower. Loot wagons activate their crates when emptied so you can then go out and loot them.

The above-ground Work Cart train engine has been reduced in power, and is now only able to pull a small amount of train cars at a time. The large new Locomotive provides superior pulling power instead.

Two new throwable items have been added to the game.

The Molotov Cocktail is a powerful area denial weapon which slows movement and deals damage over time. It can also be used to damage and destroy wooden structures. 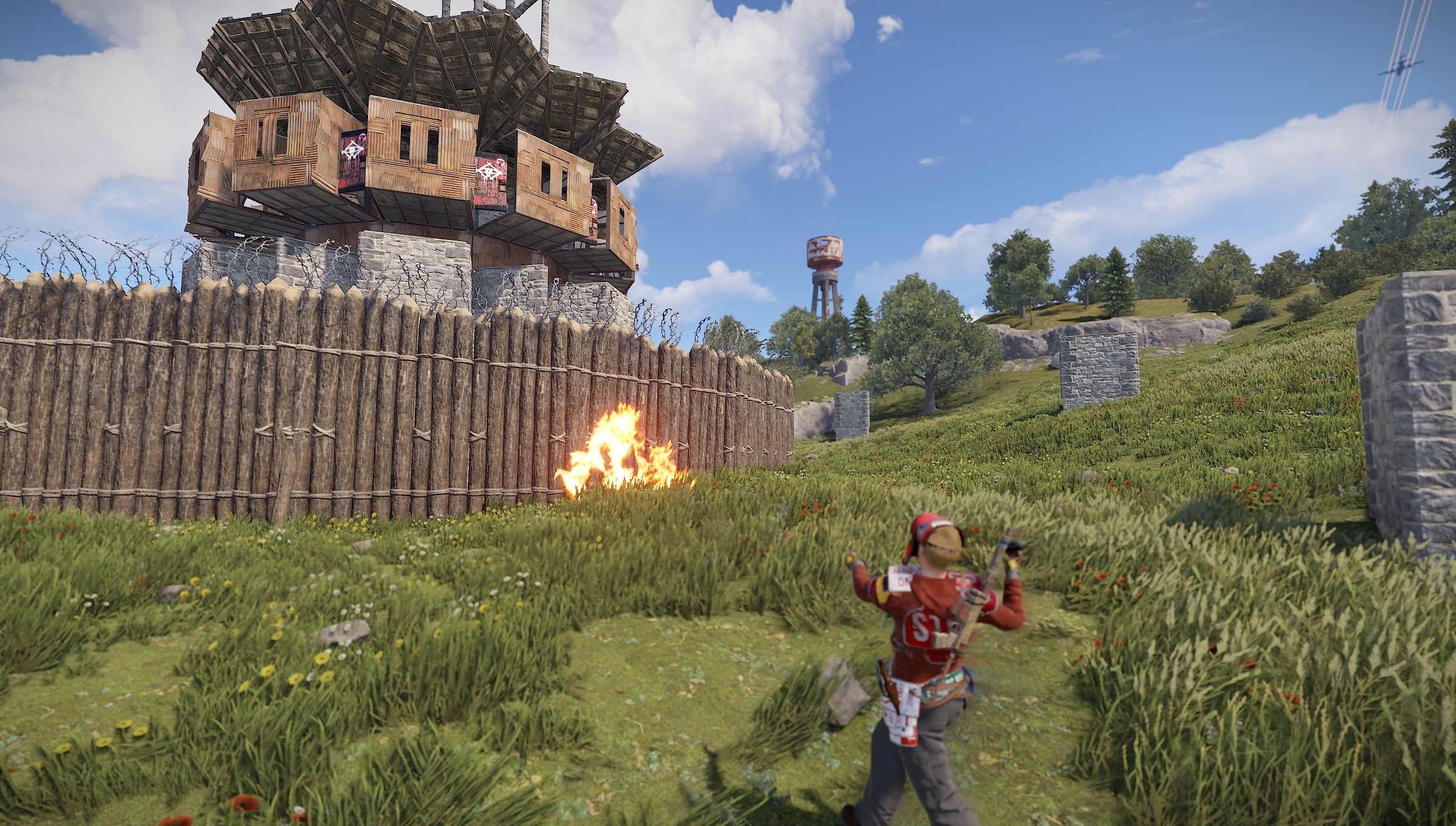 The Flashbang is a short fuse, low damage explosive which will blind and disorient anyone unfortunate enough to be in the blast radius and looking in it's general direction. We're hoping the addition of this tool reduces the benefit of corner camping and shakes up how room clearing is approached

Both are available in the tech tree of the T2 workbench. 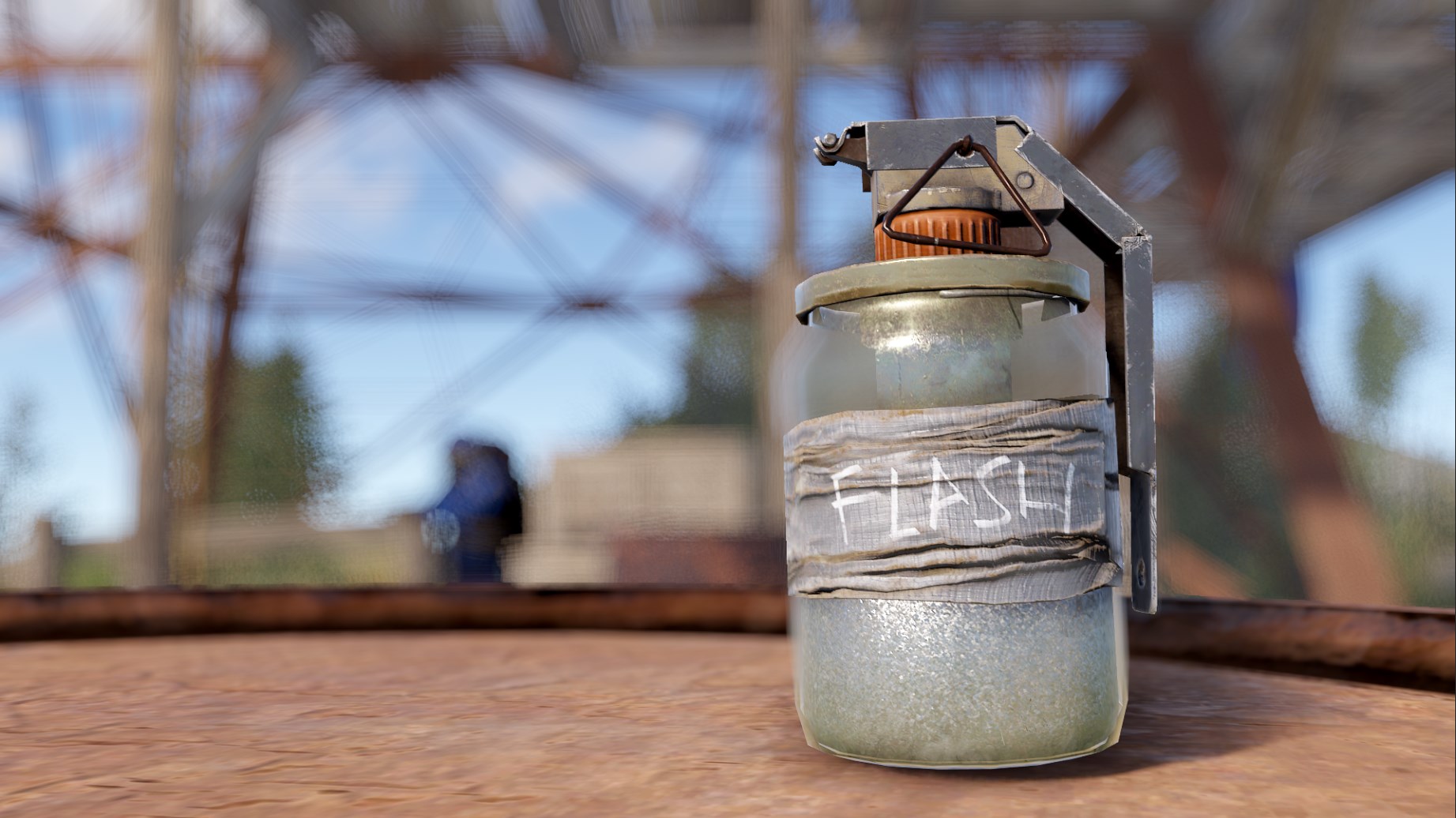 Improved Cliff Collision
A number of cliff colliders have been improved, making them easier to climb

The lighting in Rust has been quite outdated for a long time. The primary reason for this have been our highly dynamic environments that prevent us from using any sort of statically baked lighting data. This resulted in flat and boring looking environments, particularly in areas that weren't receiving any direct light. To combat this, I finally implemented our own ambient lighting model that uses a blurred version of our existing reflection data, which is already completely dynamic. 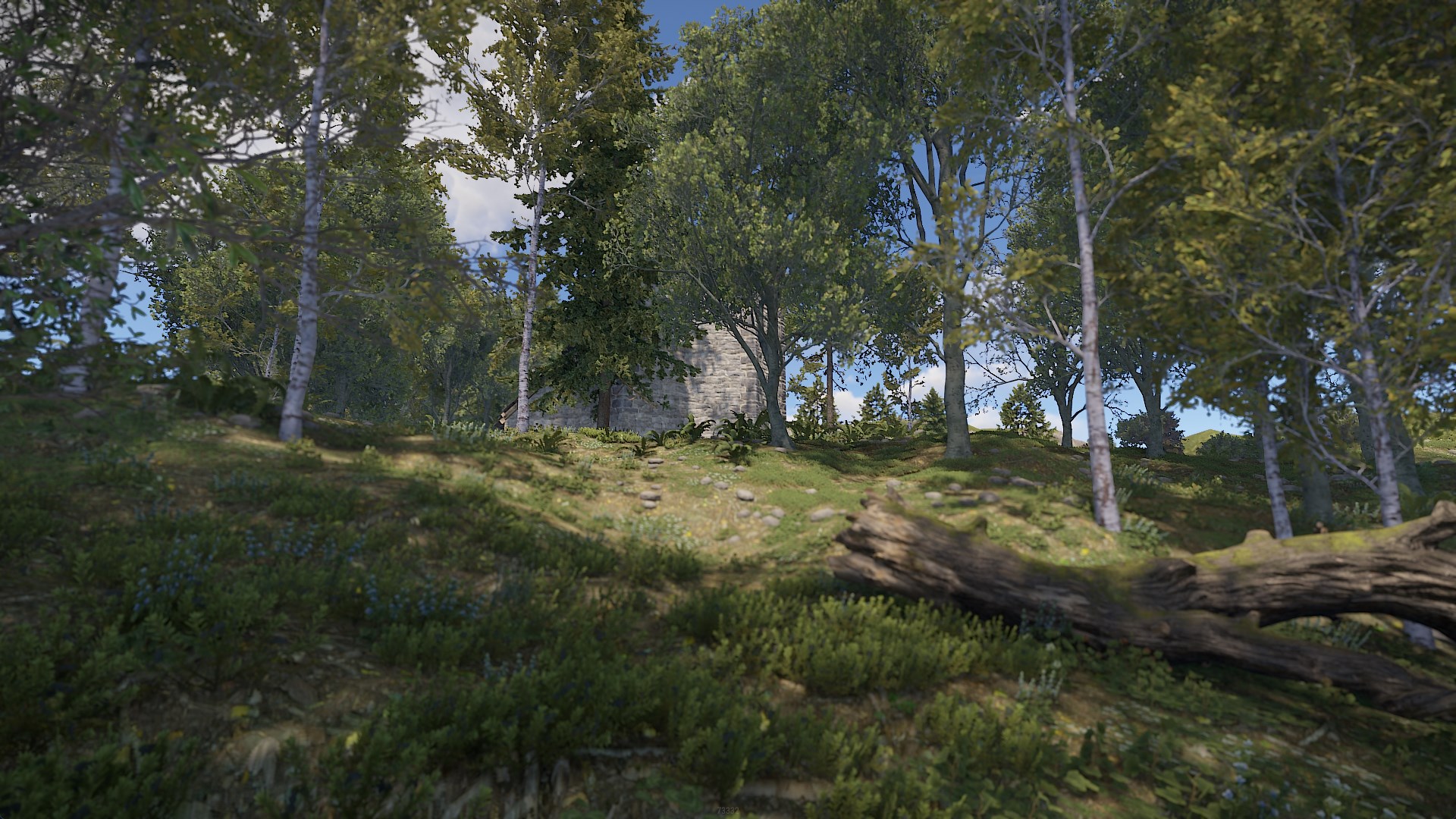 The new lighting model is of course enabled for everybody, but it comes with a few customization options. The previous "World Reflections" quality setting has been replaced with two toggles in the "Experimental" graphics options: Advanced interior lighting, which when enabled includes player bases in the new lighting model, and advanced forest lighting, does the same for trees.

I spent a good part of the month looking for client performance optimisations with varying levels of success.

I spent some time over the past few weeks adding new lights to a bunch of our older monuments. Now nearly all of them should be covered this pass, aside from a few monuments that are meant to be completely abandoned and should remain dark. This includes monuments such as Harbors, Power Plant and the Trainyard. 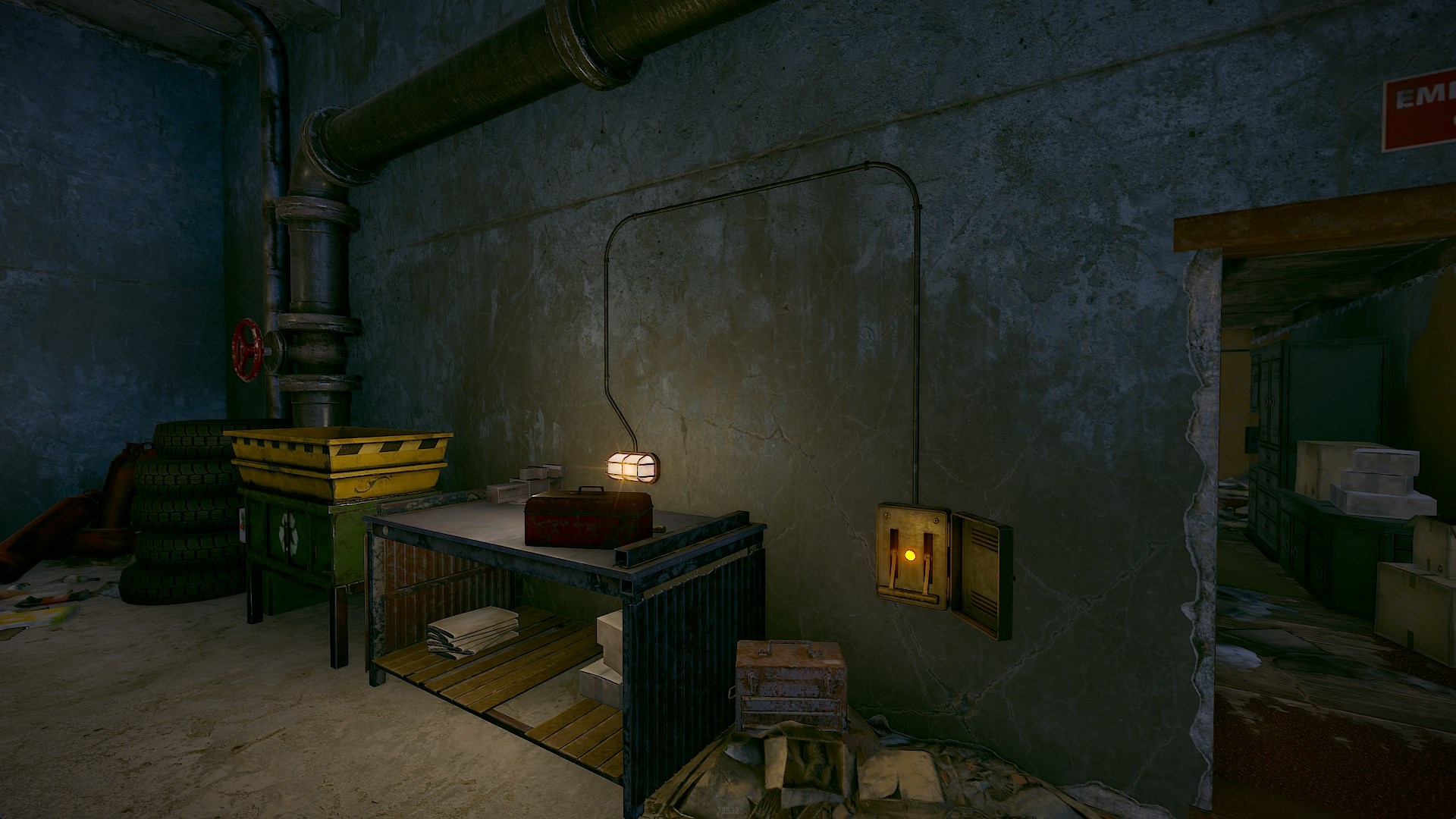 In addition, you will find that the monuments covered by the lighting pass will now feature light switches that you can use to toggle the lights on and off. You can now decide whether you want the comfort of seeing clearly in the dark at a risk of being seen by other players, turn the lights off for your safety while exploring, or use them to ambush unsuspecting players.

We recently saw a video from hJune which helped us identify a long standing issue with the aiming code. Basically, if you when into ADS mode shortly after running, the weapon bob was not immediately disabled, and instead took far too long to gradually dissipate.

This resulted in a disparity between the weapon sight and the true aim direction, meaning you were not actually aiming at your target for the first several shots. This has been fixed and aiming down the sight should feel a lot more responsive and snappy.

Thanks to everyone for taking the time to report offensive content last month, we were able to clear a lot of content on official servers as a result.

To help us quickly act on your reports, I made a Slack tool this month that allows us to remove any reported content directly from Slack, without having to load the game up. If server owners are looking for similar functionality we can recommend the Discord Sign Logger plugin by MJSU. 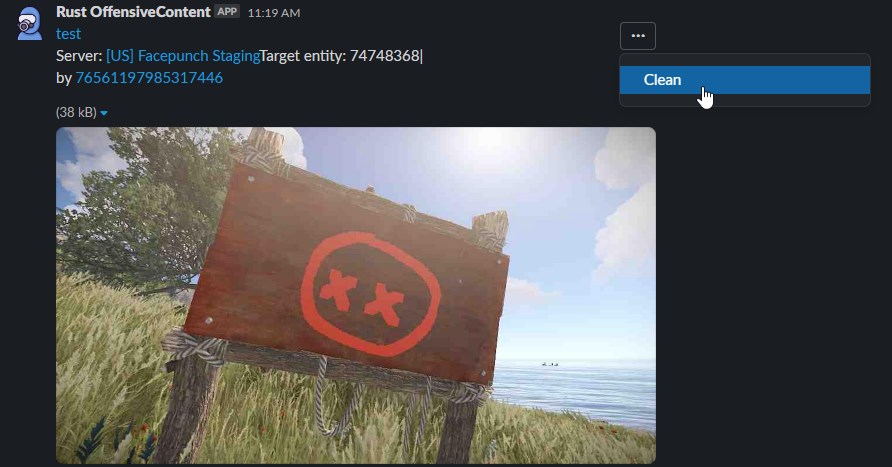 Please keep sending your reports in! 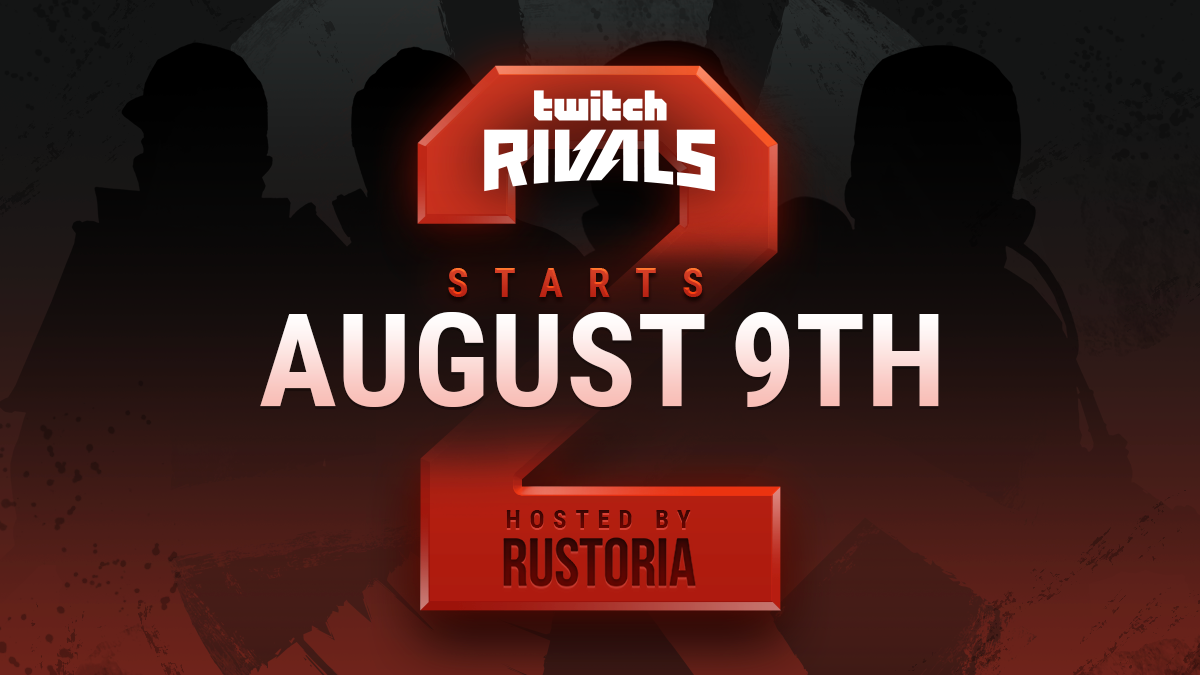 On August 9th at 8:00 pm GMT a team of 160 well-known Twitch creators world around the world will compete in this massive global Rust competition, taking place over 5 days with a prize pool worth $100k.

During the Twitch Rivals event, Rust Twitch drops will be enabled for 5 days from selected participating channels, well-known streamers such as hJune, Mendo, Welyn, Bchillz, Willjum, Panpots and of course the team captains Thegrefg, dhalucard, xqc and Disguised Toast.

Over the course of the 5 days, teams will build up their bases and supplies. Eliminating each other from day 3 onwards with the last man standing on day 5.

We'd like to thank Rustoria for working with us and Twitch to make this event possible.

We updated our legal documents, to comply with recent consumer protection and data protection law changes since we last visited the documents in 2019. We re-added an IP infringement notice form that had disappeared somehow. You can see all historic versions at https://github.com/Facepunch/Legal.

The changes will take effect in the next 30 days and you can email any questions to legal@facepunch.com.