We've added a new system for keeping track of the players you interact with.

You'll find a new tab on your inventory screen which will open the contacts panel. From there you'll be able to use the various controls to flag a player as either friendly or enemy. This will change how their name tag shows up when you encounter them in the world. Players are automatically added to the 'seen' category if you've been in close proximity for several seconds.

Any player who kills you will be added to your Enemy list. 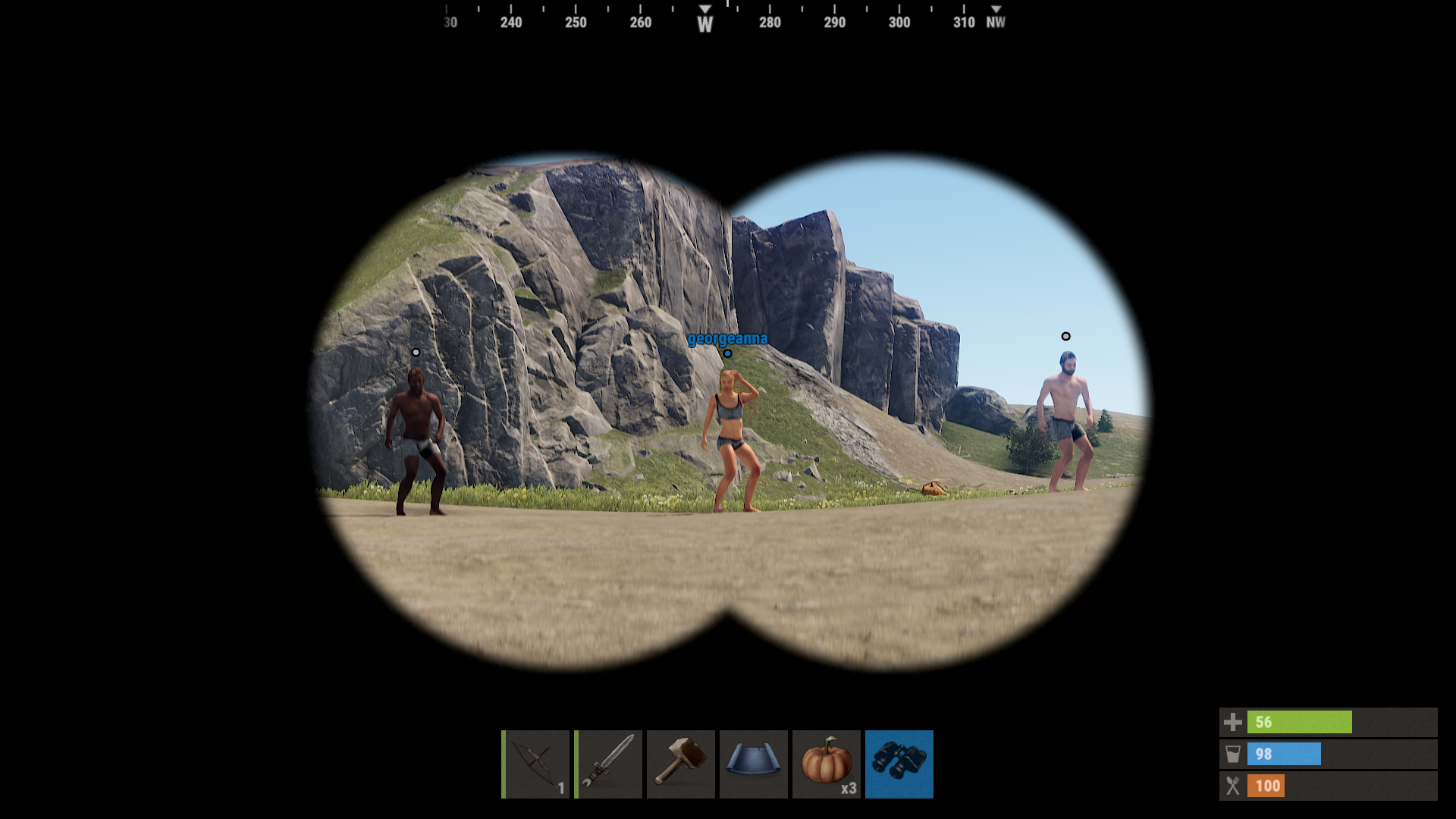 Binoculars have also received a buff, and will allow you to see a colored pip above players indicating if they are an enemy or a friend. 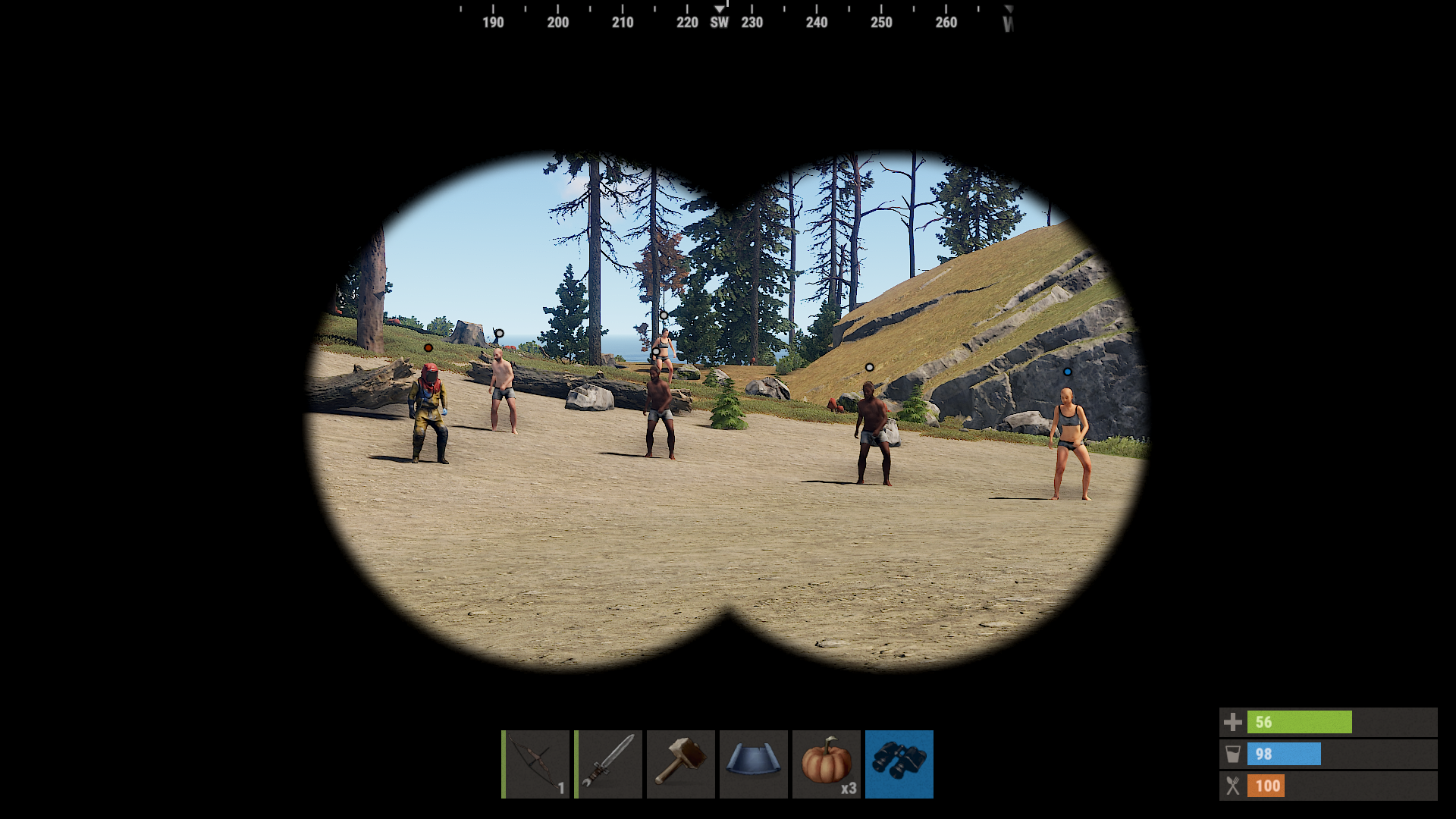 There is a rudimentary reputation system in the works which will very slightly shade your nametag either blue or red based on how likely you are to kill on sight. This system is a work in progress and will be expanded upon in the future.

Any server can disable the contacts system with the convar relationshipmanage.contacts false

The nametag system has also changed and you can now display your name plate at long distances to anyone you are looking at by using the 'wave' gesture. We hope this will allow players to avoid killing other 'friendly' players and grant the ability to signal your intentions. 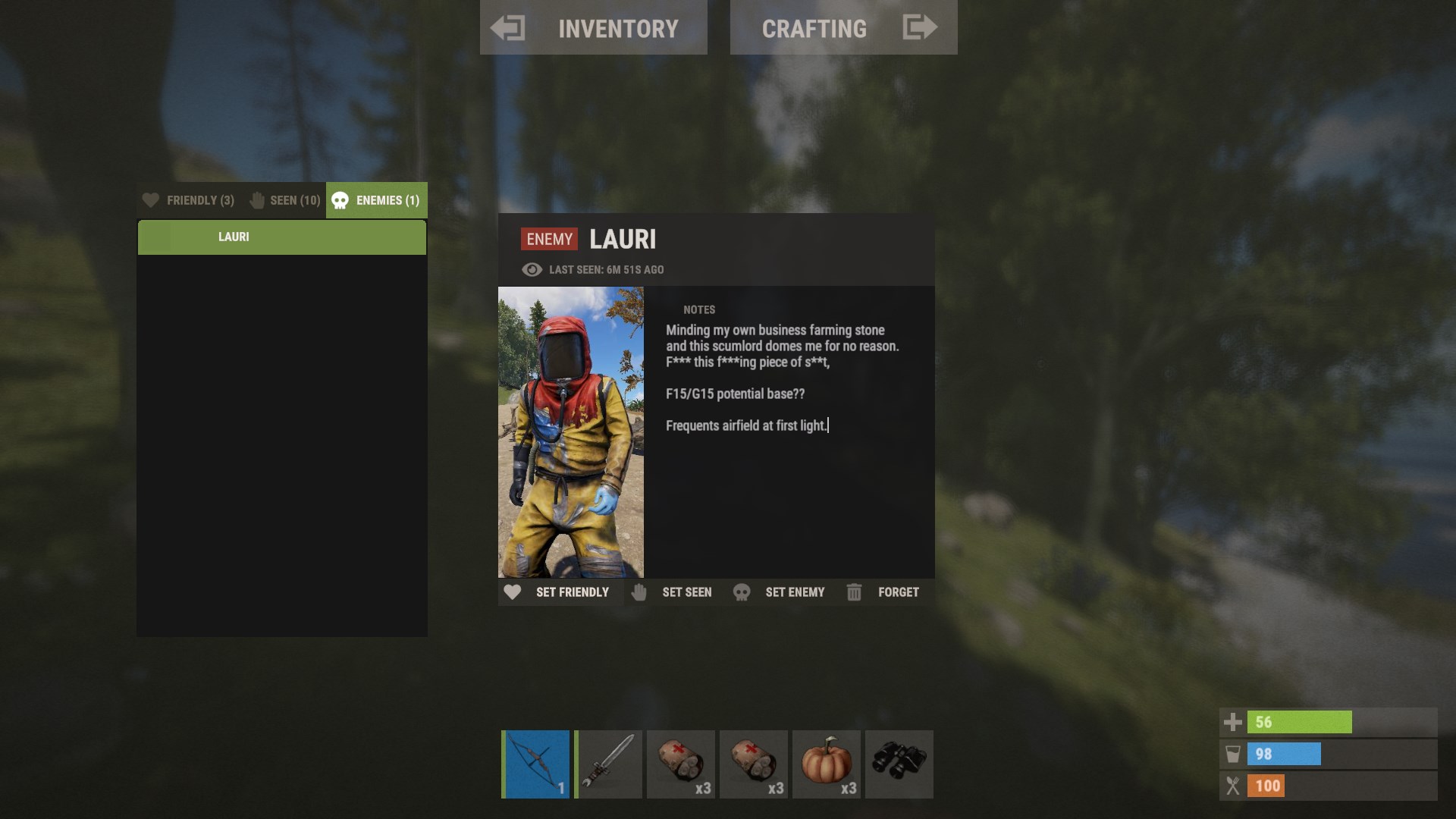 As for the majority of hardcore rust players who kill everyone on sight anyway, you may as well pretend this system does not exist as it will not affect you. However for those less inclined to destroy and kill every living thing that passes infront of them. This system might help you find some like-minded players to team up with.

This was suggested on Reddit and we all felt like it was a good idea so I added the ability to colour code your electrical wires and hoses this month. 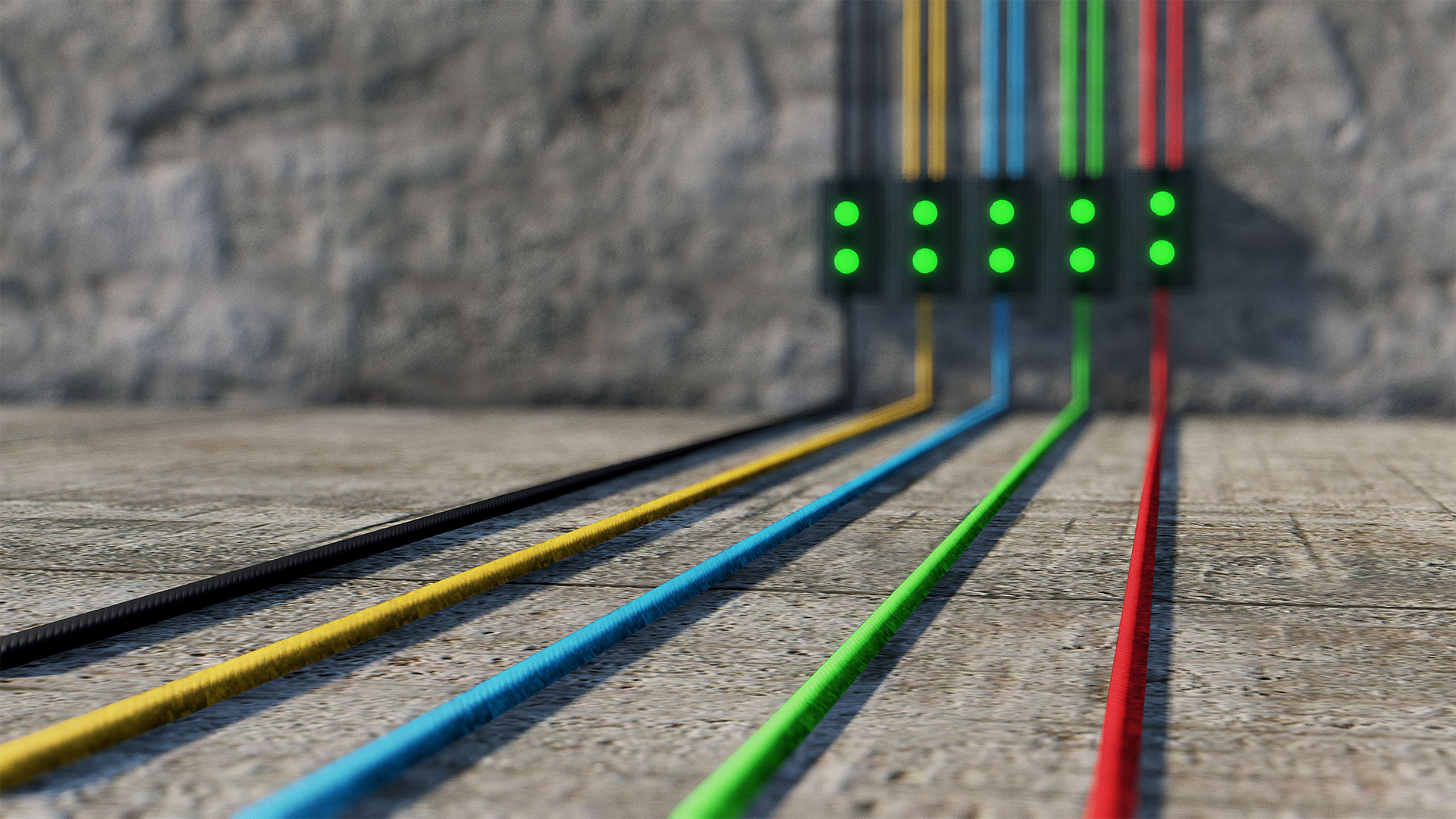 Simply hold Reload while holding the Wire Tool/Hose Tool to select which colour you’d like to use.

This month we’re adding the first iteration of a more advanced feature set for viewing and manipulating demos. This has primarily been built to improve our internal production tools, but considering the rich and diverse community of Rust content creators out there we’d love for this to be a tool that all of you can use.

Once you load a demo with “demo.hud” turned on, you’ll see a variety of new options including a shot manager and scrubbable timeline. Pressing the ALT key at any time will switch control between the demo UI and debug camera.

You can now create and manage 'shots' within demos, which are individual recordings of camera motion as well as properties such as FOV and DOF. These shots can then be played back in-sync with the demo scene.


To create a shot, simply press the “New Shot” button, give it a name and then hit record - your live camera movement will now be recorded. To end a shot recording, press the Escape key.

For added management, shots can be sorted into folders, moved between folders, renamed and deleted all from the in-game interface. Folders can also be renamed/deleted by right clicking on them in the shot list.

This current shot system is the first stage of a comprehensive cinematic toolset we’ve planned out. Our goal for the future is to expand on this system by adding features such as keyframe editing, redubbing elements of shots post-recording, UI for modifying world conditions (eg. weather, time of day) and export options so you can render your shots into actual video or image files.

Are you making videos in Rust? Let us know how this tool can help you!

The first phase of the AI rework is finished and it replaces multiple different AI systems across different game locations with a single new one.

Making changes to an established game as big and complex as Rust is scary, especially due to the multiplayer nature, so there's bound to be some initial bugs. Please report anything you find and I'll get it fixed.

The advantages of having everything running on one AI system are numerous, the main one being it should be easier to keep the AI updated going forwards. New features will be easier to add, and they will work across all of the AI, and not just for AI in certain areas or specific monuments.

So whilst there's still plenty more to come in this area, there are already some new features such as animal packs to look out for.

Rust+ now works with IFTTT! You'll be able to connect Rust to other apps, services, and devices through IFTTT to automate all kinds of tasks. For example, all of the deep sleepers who wanted Rust+ to have a louder alarm can now connect Rust's smart alarms to your actual smart home alarm, your bedroom lights, and other services which support IFTTT.

The IFTTT integration depends on having Rust+ set up on your phone so you can pair your Rust servers - so if you aren't using it already, install the Rust+ app on your phone! Once you're all set up with Rust+ you'll need to create or sign into your IFTTT account and head over to the Rust service page on IFTTT where you can link Rust+ to IFTTT and then build applets.

The current IFTTT integration does not support controlling smart switches at the moment - this is something we're looking into supporting in the future.

The animals in Rust have sucked for far too long. They stand out more than ever now with the team dropping the amazing world revamp last month.

We've updated them with brand new models and materials, as well as a fuzzy fur shader for the longer bits of hair. This gets culled beyond LOD0 so we don't anticipate a big hit on performance - in fact, in the process of updating we discovered each model had a lot of redundant bones which we've stripped out! 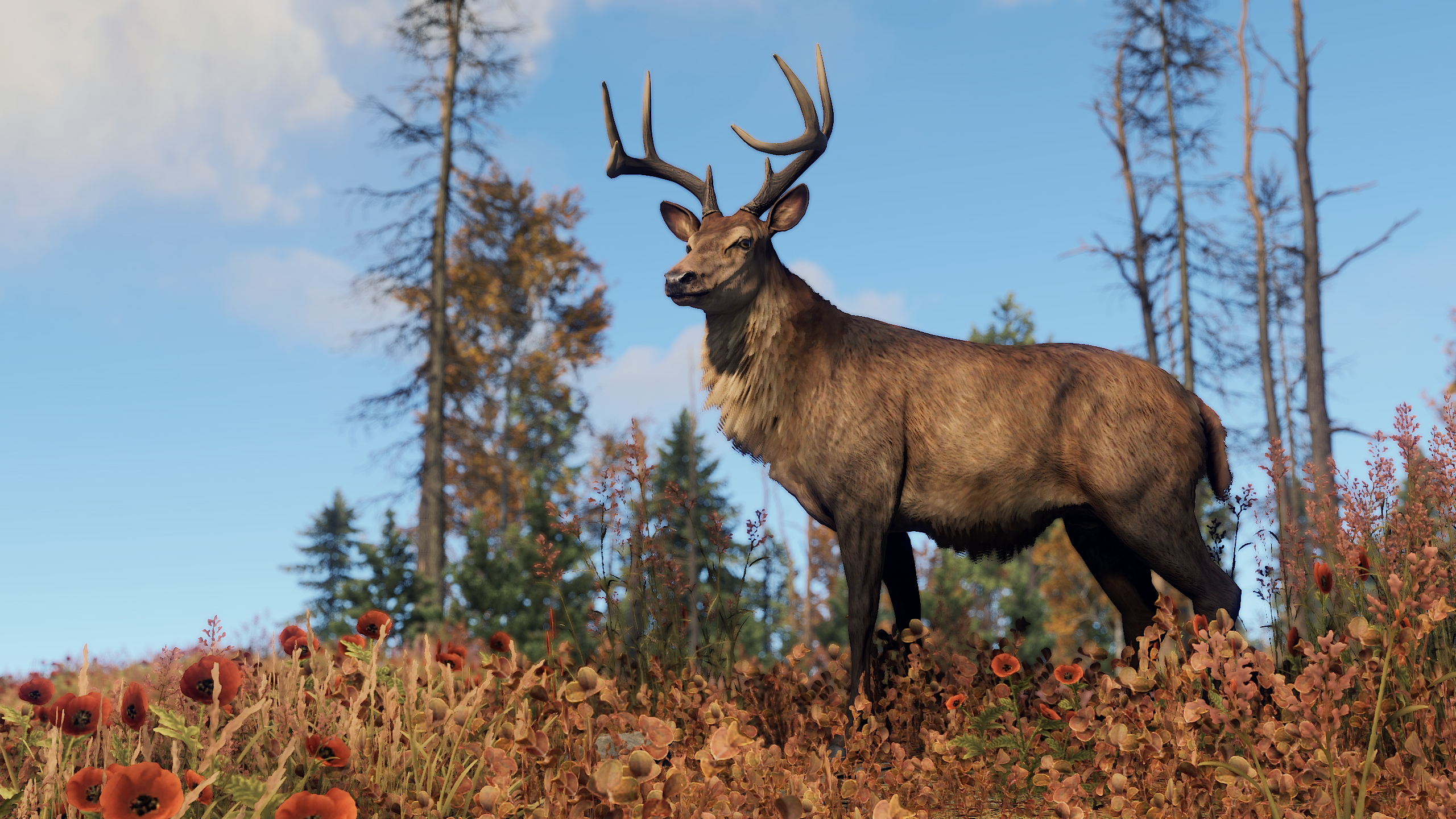 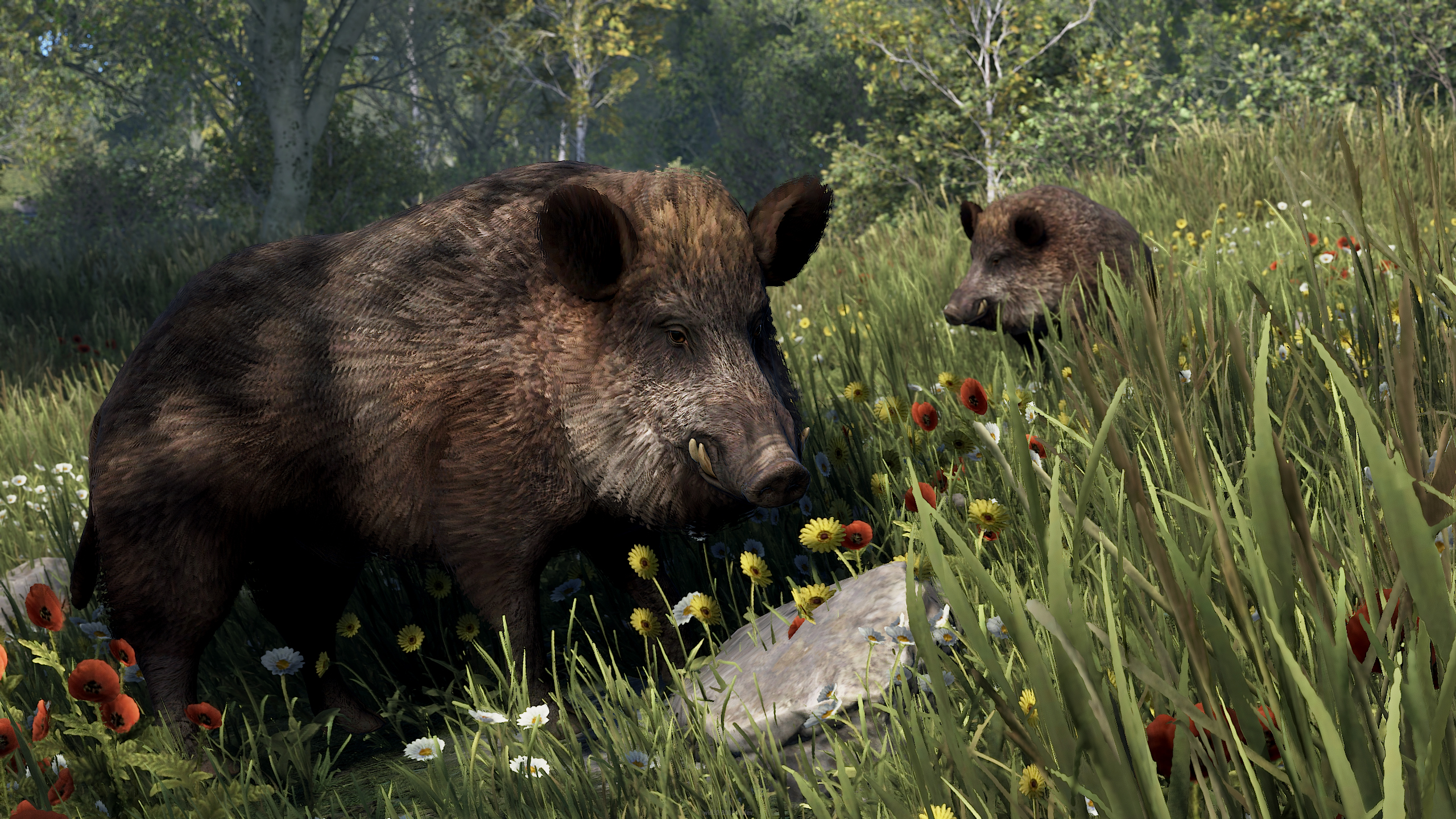 Along with the new models came the arduous task of updating rigs, skinning & animation.

Some animals proved more challenging than others as the updated models correct issues in proportions of the previous models, which meant changing bone placements.

Creating new controller rigs for the whole suite of animals would of increased the workload by months & also meant every single existing animation would have needed to be replaced just to get things functional.

I decided to try and force the current rigs into submission for any animation updates, although as mentioned all redundant bones have been removed. The idles took quite a while to get something natural, but are a big improvement on what we have. I've also updated walks & some runs where possible, but this really is a baseline to build upon.

I'll be looking to update more anims like attacks/cycles, and once the ai becomes more advance we can hopefully increase their motives/goals/states and I can start to add more animations to support this. There are also current issues with some of the code-based turn movement as well which I'd really like to improve and have a greater degree of control over.

No Twitch drops this month, they'll resume in July.

This has been a frequently asked question, as mentioned last month: Due to the huge world revamp Hapis Island is currently removed from the map pool while Petur works on bringing the map up to date with the new visuals.

No update on this as of yet but progress is being made.